Using Flow to forward a Yammer post to Teams

Summary: this post will show a code-free way to have specific tagged Yammer posts also posted to a specific team channel in Teams using Flow.

This is not a post to convince you to use Yammer versus Teams or vice versa... by now everyone should know that this "journey" is not a matter of alternatives but a matter of options.

Office365 delivers us several tools which could be used for several scenario's and therefore some tools are similar in functionalities usable for the same scenario. Which tool to use for which scenario??? Let your team and experiences decide!

I can think of multiple scenario's where a team is part of a bigger organization that uses Yammer and instead of checking all of Yammer groups and posts, this team would want to be notified (and start discussions in their own team) about one or more specific topics being posted on Yammer.

In my example we have created a Team in Microsoft Teams: Team-Portiva Fun and this team wants to know if a post has been created in Yammer with the tag #allofportiva. The way they want to be notified is by receiving a post in their General channel, so they can discuss it in their team first and secondly quickly visit the Yammer post (to reply for example).

When writing this blog post, Teams has not been released for long and Flow is getting updates weekly, so in time I expect this to be made even easier... For now let me show how I achieved this with the help of Stefan Stranger his post "Use Microsoft Flow to send a message to Microsoft Teams":

Give the operation a recognizable name: 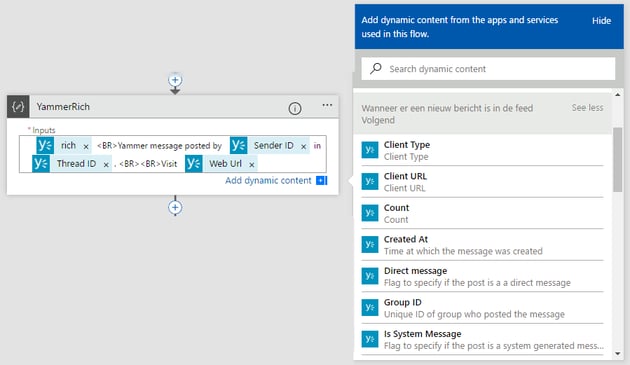 In this action I combine multiple dynamic content from the first step; because this is a Yammer trigger, we have some Yammer post info available. As you can see we can add HTML coding to add information and determine the layout. 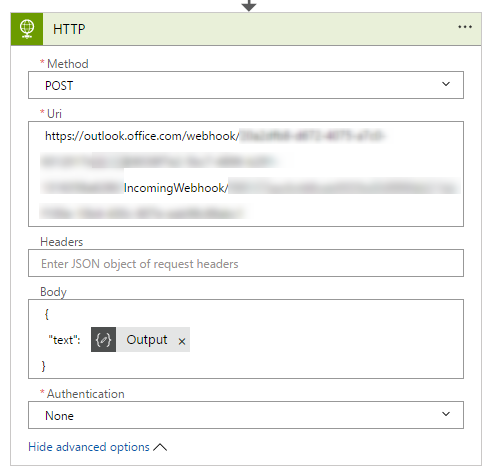 One thing to note is the Body which is "a simple JSON payload". For a noob like me who can hardly spell HTML and CSS, this was do-able with the help of some research on the syntax (https://dev.outlook.com/Connectors/Reference).
IMPORTANT: to use variables from previous steps in Flow for this Body, you need to delete the last curly bracket or else Flow will not show the popup to select variables: 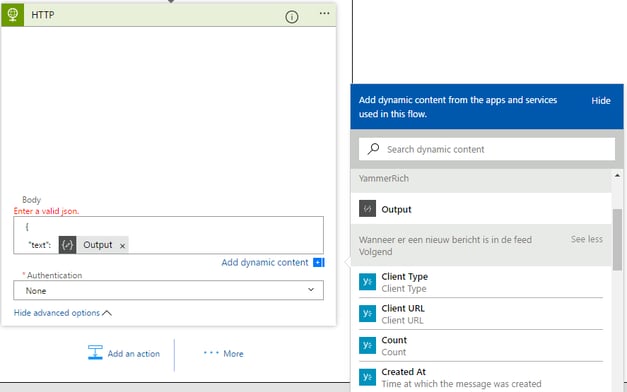 after adding all the desired variables / dynamic content, just add the curly bracket at the bottom again and everything is fine.

7. That is it! Now when someone would create a Yammer post:

a post will be added to the desired channel: